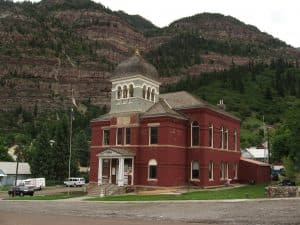 The Ouray County Courthouse is among the numerous historic sights that can be found in Ouray and beyond. This classic edifice has remained a Ouray landmark since the late 1800s and if you like westerns or follow film closely, you may also know that it was featured in the 1969 film True Grit, starring John Wayne.

Have you seen the Ouray County Courthouse lately? You may have noticed some construction taking place at the building. The courthouse is indeed receiving something of a facelift aimed at restoring the building while ensuring it keeps up with modern edifices while preserving its fascinating history. Among the work the courthouse will undergo, the foundation will be improved, its brick exterior will be improved, and you’ll also notice landscaping and sidewalk upgrades.

The Ouray County Courthouse opened its doors in December 1888, and it involved a building cost of about $20,000 to build. Several of the furnishings that have been around since the courthouse opened in the 1800s are still being used in 2019, such as vaults, desks, and safes.

For those eager to see the improvements, work on the Ouray County Courthouse is tentatively scheduled to finish in March 2020.