The Musical Stylings of You Knew Me When 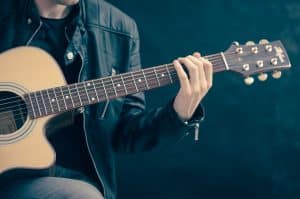 The Wright Opera House is always active with various events going on and next Friday will be no exception. This time around, the curiously named band You Knew Me When will be performing.

You Knew Me When is comprised of husband and wife Cie and Karisa Hoover, who perform a mix of indie folk-rock music that sounds like a full-fledged band. In 2012, the couple decided to take a chance and leave their full-time jobs to tour around the country for a year. That one year turned into something of a perpetual tour, which also lead to You Knew Me When releasing their first studio album You, Me, and the Rest of the World that same year. The duo followed up their debut with their sophomore effort titled We Found Roads two years later and their most recent album, Into the Looking Glass in 2017.

The members of You Knew Me When come from musical backgrounds. Karisa was once a public school music teacher in Nashville and she now serves as the Ouray School music teacher. Her husband Cie was Gibson Guitar’s Global Events Production Manager.

If you can’t catch You Knew Me When at the Wright Opera House, you can stream their music on popular platforms like Spotify, Pandora, and more.